At Travelex, we love to plan multiple group tours throughout the year. Some of our favorite tours are the music tours we plan, which are uniquely themed tours that take guests behind the scenes of some of the best music destinations in the world. Today, we spotlight Montréal and Quebec City’s Sacred Music Festival, which educates and entertains guests about some of the earliest forms of music.

This tour comes at one of the best times to visit Montréal and Quebec City: September. If you plan your visit too late in the fall or winter you can expect frigid temperatures. A September visit means that it’s neither hot and humid, nor cold, making for a lovely time to visit. Temperatures are typically between 60 and 70 degrees Fahrenheit.

The itinerary for this trip offers the best of both worlds, as it includes a scheduled itinerary to tour the music scene of the region, while also leaving free time to explore Montréal and Quebec City on your own. Montréal is not only one of the most popular destinations in Canada, but in the entire world. While Montréal is one of the largest cities in North America, it maintains a certain old-world charm, which you’ll see most apparently in Old Montréal, with its cobblestone streets, horse-drawn carriages, and historic buildings and homes.

This Montréal and Quebec City itinerary will include scheduled sightseeing, as well as free time, which will feature tours of Montréal and Quebec City and a visit to Montmorency Falls, which is actually 100 feet taller than Niagara Falls. Most evenings of the trip include special meetings with the region’s premier music professionals, followed by live performances. The price of the tour, $3,450, includes airfare, accommodations, several meals, several live performances, private motor coach transfers, and sightseeing tours.

Here’s a glimpse into what travelers experienced on this amazing trip:

Depart Chicago O’Hare on a morning flight to Québec City. Your private motor coach will transfer you to the Loews Hotel Le Concorde, your home for the next three nights. The hotel is located on the famous Grande-Allée of Québec, adjacent to the Plains of Abraham. This evening, our welcome dinner will be at one of North America’s oldest private clubs, the “Cercle de la Garnison.” 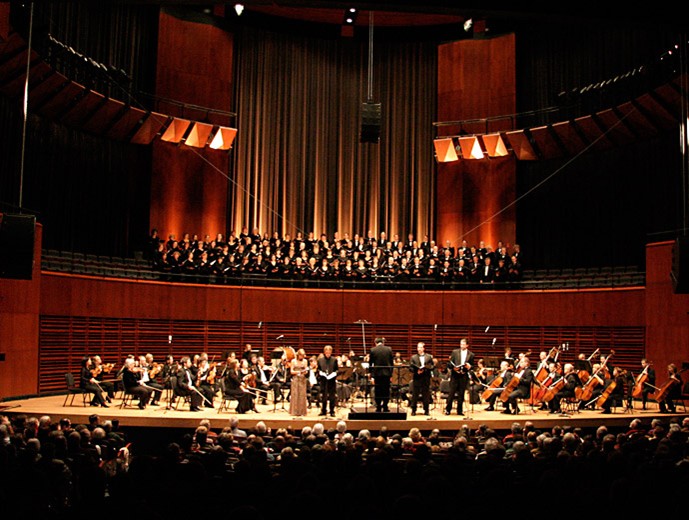 Image above taken from QuebecRegion.com.

This morning you will board your motor coach for a sightseeing tour of historic and modern Québec City. After the tour you will have the afternoon free to explore, visit or shop in this wonderful city. Later there will be a pre-performance lecture by Lisa Flynn before we depart for the Sacred Music Festival performance by soprano Natalie Choquette.

Today we will tour the Beaupré Coast, the Montmorency Falls and Sainte-Anne-de Beaupré and its beautiful Basilica. We will enjoy lunch at an 18th century French Canadian farmhouse on the Beaupré coast. This afternoon we will visit the National Museum of Fine Arts. Join Lisa Flynn for a pre-performance lecture prior to tonight’s performance by Kitka Ensemble.

This morning we will board the train for Montréal. Upon arrival we will have a sightseeing tour of Montréal. We will have a lunch stop in Old Montréal and then continue on to the Hotel Le Germain, our boutique hotel located in the heart of downtown Montréal.

You will have the day at leisure to explore Montréal. This evening we will dine at the Restaurant Le Laurie-Raphael at the Hotel Le Germain. Lisa Flynn will give a pre-performance lecture for tonight’s concert in the new concert hall specifically designed for the Montréal Symphony. Kent Nagano – Turangalîla-Symphonie, including back-stage meeting with Maestro Nagano.

After breakfast you will have time at leisure to find that last souvenir. Depart this afternoon from Montréal back to Chicago O’Hare.

Although this trip is already occurred, we do offer a variety of other planned musical trips. Contact us to learn more about future trips.